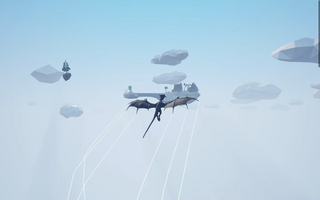 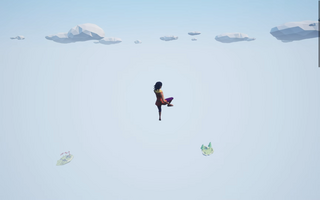 Hey all, welcome to the latest update for The Bear and the Broomstick! Officially called Alpha 0.2, it's unofficially the aesthetic update. With a new skybox, updated lighting, character customization, and tons of behind the scenes improvements, I feel confident saying that this is turning into a real game. So without further ado, let's get into the nitty gritty.

Gameplay
-Added a character customization screen. You can now customize your gender, hairstyle, and your dragons look. There are almost 2000 possible combinations!
-Added upgrade tokens. Collecting one increases your dragon form by 10 seconds. There are three so far.
-Added a laser to help aim your grappling hook

Behind the scenes
-Switched from tick event to timer functions for handling core game logic. This has increased performance dramatically, especially on weaker systems
-Cleaned up grapple code. Fixed a really pervasive bug where the rope would appear to be attached some distance in front of the actual attachment point

Get Soar: Pillars of Tasneem

Be a dragon-shifter. Explore the sky!